The other night as I sat down to watch a college basketball game, I found myself instead drawn into a documentary about a team from 30 years ago. ESPN was showing one of their 30 for 30 documentaries and it was about the 1983 National Champions, the North Carolina State Wolfpack. That NC State team was one of the great Cinderella stories in college basketball history. They were also coached by one of the greatest leaders of all time, Jim Valvano. 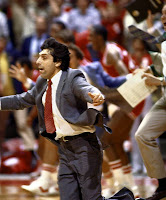 Jimmy V, as he was known, was a great basketball coach. He won a lot of games, including that 1983 championship. One of the greatest scenes from that title game was Jimmy running around after the game looking for people to hug. That 1983 team was lead by Jimmy’s “never give up” attitude. Without that attitude, NC State could never have slayed giants like Ralph Sampson, one of the best college players of all time and Virginia. They could not have beaten Phi Slamma Jamma and Houston, who were lead by Hall of Famers Clyde Drexler and Akeem (later Hakeem) Olajuwon. Jimmy V really was an outstanding motivator and coach. But his success as a coach is not where his story ends.

Jimmy retired from coaching and went into broadcasting. He also did quite a bit of motivational speaking. His  “never give up” attitude and stories from the 1983 run made from great speeches. In 1992, Jimmy V was diagnosed with bone cancer and that is where his story really begins. His “never give up” attitude was tested with cancer, but Jimmy refused to quit. But this was one opponent that Jimmy could not beat with his will. On April 28, 1993 Jimmy lost his battle.

During his battle with cancer, Jimmy became an inspiration to many. He fought through the pain, even though there were times he could not walk. Jimmy’s most famous moment (even more famous than his 1983 championship) came just two months before he died at the 1993 ESPY Awards presented by ESPN. It was here that Jimmy was honored with the Author Ashe Award for Courage for his courageous battle with cancer. It was a shock to many that Jimmy actually made it to the ceremony because he was so ill, but after being helped up on stage his inspirational spirit, lovable personality, and motivational words started something special. That night Jimmy announced that he was starting The V Foundation for Cancer Research, which since its forming has raised more than $100 million for cancer research. The motto of the foundation is appropriately “Don’t Give Up, Don’t Ever Give Up.” He said that this research may not save his life, but it may save his childrens lives. As always, Jimmy was more concerned about others than himself. 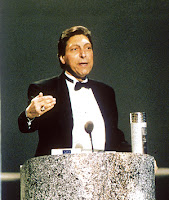 That quote has been one of my personal affirmations since seeing Jimmy V’s speech 20 years ago. Jimmy is one of my hero’s and I consider him to be a leader who made a tremendous difference in this world. He led with passion, charisma, and humor. He made everyone around him better. One of my favorite things Jimmy said was that everyday you should laugh, cry, and think. “If you laugh, you think, and you cry, that’s a full day. That’s a heck of a day. You do that seven days a week, you’re going to have something special.”

Jimmy’s life and death continue to inspire others to this day. Even in a documentary about his 1983 championship team, his personal fight stole the show. If you have never seen Jimmy’s ESPY speech, I encourage you to watch it today. I hope it will inspire you as it has inspired me. And I hope you can be introduced to one of the greatest leaders of all time; a basketball coach turned broadcaster turned hero. Remember that no matter what happens in your life, “Don’t Give Up, Don’t Ever Give Up!”

One thought on “Don’t Give Up, Don’t Ever Give Up”