In 1976 America was introduced to one of the greatest underdog stories of all-time. Rocky (1976) was a story of a down-on-his-luck, small-time boxer from Philadelphia, who gets the shot of a life-time when given the chance to fight Apollo Creed for the World Heavyweight Championship. In the fight, Rocky shows that he has the heart of champion by going the distance (15 rounds) with Creed. This underdog story was told again in Rocky II (1979), Rocky III (1982), Rocky IV (1985), and finally in Rocky V (1990). Each movie won the hearts of viewers because of the toughness heart of the main character, Rocky Balboa.

Rocky was not just a boxer, and he was not just a character in a movie. He became a symbol of success, failure, winning, losing, fortitude, and stamina. Most of all, I think he became a symbol of leadership. Sylvester Stallone did the world a favor in 2006 when he released the sixth and final movie, Rocky Balboa. In this installment, Rocky is living a normal middle class life in Philadelphia. He has lost his beloved wife, and is struggling to find his purpose in the world. He had always been a fighter, and once a fighter is told he cannot fight anymore, he has trouble moving on. Rocky gets another chance to fight when he is challenged by the current unpopular champion, Mason Dixon (Antonio Tarver) who is having an identity crisis of his own. Rocky makes the most of his opportunity once again and proves that the last thing to age is ones heart. 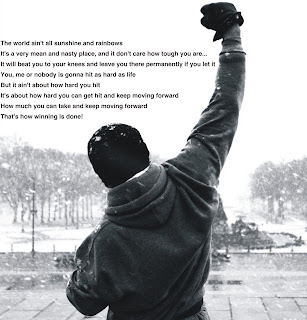 This movie or any of the Rocky movies might not come to mind when thinking about films about leadership. It is simply about an underdog boxer to most people. But that is not really what it is about. It is a story about a leader who cares more about others than himself. A leader who struggles just like everyone struggles, but in the end he does what he needs to do to be successful and to be an effective leader.

Rocky is a leader for many reasons, some of which may not be apparent to those who have only seen the movie once. Rocky came from a poor family and then he became wealthy from his boxing career. He then lost that wealth and as stated before is living a middle-class life in the last movie. He is a very empathetic person and that is especially evident in the film. Rocky runs his own restaurant and everyday he feeds a man whom he knew from his early fighting days. They do not go into this much in the movie, but it is one way Rocky serves. The man whom he feeds is a very religious man and even accompanies him to his fight, where he prays with Rocky before the fight. Rocky saw something special in this man, which is something only a true servant-leader can do.

Rocky also proves to be a great leader in his relationship with his son, which is a big part of the films story-line  His son Robert is having a tough time living in his father’s shadow. Because of this he begins to resent his father and even blames him for his lack of success. But Rocky does not accept his son’s attitude. He sees something special in him, just like he did in his old boxing friend. He believes his son is capable of so much more than he ever was capable of, and he is committed to making sure he keeps growing and moving forward.

Rocky shows his commitment to the growth of people in his relationship with his son and also with his old friend. It is also clear in the way he treats his brother-in-law Paulie (Burt Young), the female character Marie and her son. In a conversation with his son he says, “It ain’t about how hard you hit, it’s about how hard you can get hit and keep moving forward.” He wants the other people in his life to learn from his never give up attitude and use that to make a difference in the world. But to do this they must be willing to take risks and take the hits as Rocky says. Many times we avoid taking risks because of fear of failure, worry, doubt, and other forms of negative thinking.

Rocky Balboa may not be an obvious choice when thinking about an effective leader, but I truly believe that the Rocky Movie Series could become a leadership program. There are so many examples that one could follow from the movies, and from the life of Rocky. The story is about a man who believes in himself, and believes in other people. Is that not really one of the biggest things we look for in leaders? Everyone needs something to believe in and someone to believe in them. With those two things anything can be accomplished. Rocky gives people something to believe in, that being his faith and his heart. He also believes in others (Adrian, Paulie, Marie, his son, etc.). His belief in others can be seen in the way he treats them. Leaders treat people in a way that boosts their self-confidence, allowing them to achieve more than they may have have though possible.

One of the songs in the Rocky movies was “No easy way out!” by Robert Tepper. The lyrics state that “there’s no easy way out, there’s no shortcut home.” Leadership is a lot like that. There is no easy way out. It takes determination as a leader to get back up and fight for what you believe is right. Leadership is about making the right decision everyday regardless of popularity and circumstance. Leadership is a slow moving train. There’s no shortcut. Often times we look for the path of least resistance, but a true leader charges toward the path of most resistance and along the way he serves others and treats them the right way. This is sometimes hard, sometimes complicated, but there is no easy way out. We all must become the leaders that God is calling us to be, and if we need a good model to follow, why not look in an unlikely place, like a Rocky movie perhaps.