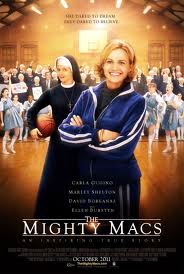 Last week I attended a special screening of a new movie that will hit 1000 theaters on October 21, 2011. You probably have not seen any advertisements for it on television. You probably haven’t seen any ads for it online or anywhere for that matter, but unlike all the movies with more publicity, The Mighty Macs (Quaker Media) is well worth the investment of time and money.
The Mighty Macs is about what we crave in America, an underdog who overcomes numerous obstacles to achieve a dream! The movie is based on the true story of the 1971-72 Immaculata College Women’s Basketball team that became the first Cinderella story in the women’s game, winning the National Championship as a 15 seed.
The Immaculata team was led by Cathy Rush, a woman who had the courage to break through the cultural norms and be who she wanted to be, not who the world told her to be. Her leadership is the reason for the success of her team. She was strong, confident, and had the fire in her to motivate her team to greatness no matter the odds.
Cathy Rush is the type of leader we all should strive to be, and she is one of the many reasons you should see The Mighty Macs. The movie has a strong faith component as Immaculata College is a Catholic School that was run by nuns. The faith component makes the movie even better. It is for all ages, for all denominations, women or men, boys or girls. The story is true and unlike many Hollywood movies, the filmmaker (Tim Chambers) did not stretch the truth.
The Mighty Macs is the female version of Hoosiers. The story is that good. It will have you on the edge of your seat. If you are like me, it will bring a tear to your eye. It will make you want to overcome the odds and accomplish your own dreams! Do not miss out on the movie!