Home »Blog»Guest Posts»John Wooden: A true leader who made a difference

All of those things bring me to talk about what John Wooden really was. That of course is a great leader, who made a difference in so many different areas and in so many lives. You would be hard pressed to find someone who didn’t have something nice to say about Wooden. 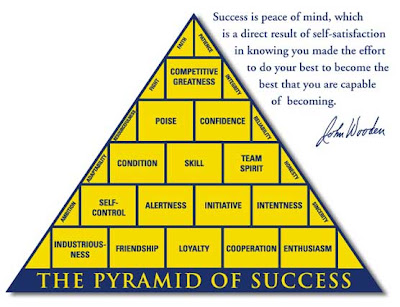 Wooden’s leadership ability was uncanny. He lead by example and never compromised his beliefs. Early in his career, while coaching at Indiana Teachers University, he refused an invite to a post-season tournament because it would not allow African American players. Being a leader takes courage and Wooden had this quality. He stood up for what he believed in and practiced what he preached. I always remember Wooden’s pyramid of success. It is a great tool for any aspiring leader. If you have never seen the pyramid, I encourage you to read up on it.

John Wooden died on June 4, 2010 at the age of 99. He taught me the two sets of 3’s: “Never lie, Never cheat, Never steal. Don’t whine, Don’t complain, Don’t make excuses.” He was a simple, yet brilliant man. He was and always will be a leader who made a major difference in the world. RIP John, your great life may have come to an end, but your legacy will live on forever.