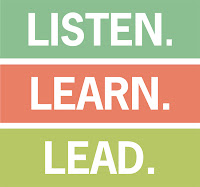 Nathan Green is co-founder and President of campus2careers as well as a board member of the Austin Young Chamber Commerce.

As the founder of my company, it’s easy to think I know the right answer because I have been around the longest. While that may be true in some situations, it can’t be true if you want to grow your company beyond yourself.  In fact, knowing when to follow instead of lead is one of the most important traits of a leader.

Just over a year ago I had the opportunity to hear Lee Scott, CEO of Walmart from 2000-2009 (which were 4 of the 5 years they were the largest company in the world), talk about his success and rise in the company. What was most remarkable about Mr. Scott was how unremarkable he was.  He did not come across particularly bright, charismatic, or even ambitious; instead I would describe him as humble and curious. He summed up his career by saying he was always the least knowledgeable person in the room and so, relied on other people to help him make the decisions. This comment and practice is why Mr. Scott is not only a great leader, but someone I admire and look to emulate.
At 30 I became a General Manager (GM) of a multi-million dollar business unit at Harcourt, which was soon after acquired by Pearson, the largest publisher in the world.  While I never shared my age with my employees/team, I was actually one of the youngest and least educated (almost everyone had a Master’s degree or higher) in the dept.  I was also in way over my head and had to quickly learn what a P&L was, for example (I was a tech and strategy consultant before taking this position). In this case ignorance was bliss, as I relied on my team (instead of myself) to make decisions. This brought increased comradery, accountability, and action.

This also establishes a new, and in my opinion, more effective form of leadership.  Instead of a leader who makes the decisions that others follow and enforce, the leader’s role is to remove the organizational barriers and roadblocks so each employee can be more successful at their job. In fact, I would tell people that my job as GM was to make their job easier, and when you accept that your job as a leader is to follow as well as to lead, your job will get easier too.

Today’s post is the first of the SOS Leadership Men Who Lead Blog Series. The purpose of this blog series is to share the stories and insights of men who are answering the call to leadership in their lives. Come back each Friday to read more!

One thought on “Men Who Lead, Know How To Follow”